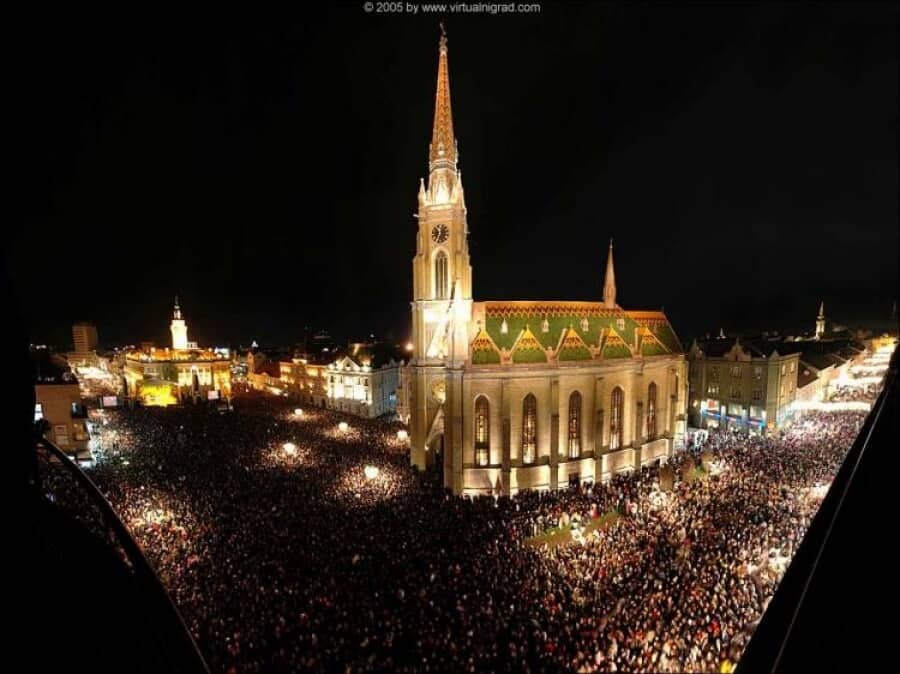 Summer Festivals in the Balkan Peninsula You Better Not Miss

Your summer Exit to a new Adventure

It was August 2000 when three Serbian students gathered in the university park of Novi Sad and decided to EXIT from the era of isolation. That was the first Exit festival and lasted for more than 100 days under the slogan “Exit out of 10 years of madness”.

The following year, EXIT was moved to Petrovaradin Fortress where to this day it still attracts millions of funs each of the past 15 summers. It might not be considered anymore a political cry against oppression but it is without question one of the most recognized festivals around the globe. In 2014 it was officially proclaimed as the “Best Major European Festival” at the EU Festival Awards. Not so bad for a small country like Serbia competing with 360 festivals across 36 countries judged by 620.000 voters.

This summer it is coming as an Adventure. Two festivals and two countries are combined in order to form what EXIT is today. From 9 to 12 July, 2015 the traditional EXIT Festival will take place in Petrovaradin Fortress. A few days later the feast is moving to Budva and the SEA DANCE Festival lasts from 16 to 18 July, 2015. The lineup is not fully announced yet but so far the British metal band Motörhead, the American Eagles of Death Metal and famous Djs like Hardwell and Chris Liebing have confirmed their presence to the music venue. You better hurry up for tickets. The prices of the booze will make you fall in love with this Balkan corner.

Get In Music in Croatia

Fairly enough, Croatia is considered the sacred temple of boisterous revelry in the Balkans. Every summer its lovely beaches, boats, lakes, meadows and whatever else you can imagine become home for the unrepentant lovers of music. From electronic Dj sets to rock heavy lineups and all the way to metal sounds Croatia is an all inclusive package deal.

Located on the inland Youth Island in the middle of Lake Jarum, INmusic is the biggest international open-air festival for rockers. And the cheapest one. Surrounded by a green forest in the capital Zagreb, the three-day gathering will cost you just 40 euro while you can enjoy free yoga sessions and attend didgeridoo, djembe and juggling workshops. Be aware though, the deal lasts until the 17th of April. Don’t risk it and hurry up to get the tempting ticket.

This summer the 10th edition will be held on 22-24 June 2015. The first official announcements include the rock bands of Placebo, Black Rebel Motorcycle Club, Death Cab for Cutie. The pleasant outsiders of 2014 Future Islands will also be there performing among other their fourth album hit “Seasons (Waiting for you)”, the best track of 2014 according to the music experts of Pitchfork.

The Meadows of the Rhodope Mountain

This is not what we call typical summer festival. If you are searching for the Global music barones then you have no place in the Bulgarian mountains of Rhodope. The once trackerless hillsides of the country has turn the past four years into the meeting point of underground artists from all over the globe. It seems that Meadows in the Mountain became an inspiration for musicians in a hippy chlling mood. They decided to spread their sounds in the fetching valleys, explore the paths of the remoted hills, enjoy their booze under the waterfalls. Who wouldn’t fall for this?

This festival is not only about music but it is still there to cheer you up. Close to the tiny village of Polkovnik Serafimovo, every summer you find the two main stages: the Sunrise Slope and the Sunset Valley. In between a big range of music sounds, from contemporary house, electronic music, disco bits to gypsy jazz and rock sounds, attedees dance next to bonfires. More the programming gives you the possibility to attend almost all concerts since the overlap of the stages is minimum.

This year, starting the 12th of June the festival will last for three days and nights. The lineup is not yet announced but the early bird tickets are already sold out. Once you arrive in Rhodope mountains, you are attached for life.

Staying in Athens for the summer? Hurray Ejekt Festival!

Heading south, probably the most famous summer festival on the verge of the Balkan region is Rockwave festival. But since 2005, Hooverphonic, Beastie Boys, James, Pixies, Kasabian and so many top bands have found their way to the Greek capital through Ejekt Festival.

The real Balkanik Festival in Romania

If you want to visit the Balkans because you wish to experience the real Balkan music, none of the aforementioned events will fully satisfy you. You better forget all the rest and head to Romania. Balkanik! Festival, the three-day event dedicated to the real Balkan culture is what you are looking for.

Previously funded by the Norwegian SEE Financial Mechanism 2009-2014, this year the festival will be also partner with the Intercultural Museum of Oslo. Between 11th and 13th of September, Balkan sounds will capture Bucharest. The festival is located in a green oasis in the heart of the capital’s center.

The lineup is not revealed yet but one thing is sure. You will not leave without experiencing the aura of Balkan and gypsy music, mixed up with traditional elements and electro influences. Previous performers like Shantel and Bucovina Club Orchestra, Kiril Draikovski, Taraf de Haïdouks Django Lassi prove it.